Just a few weeks ago, the New York State Department of Environmental Conservation, or DEC, announced that they had found a spawning lake sturgeon in the Genesee River, for the first time in more than 50 years. This is the story of decades of work among conservation partners. This is a story of restoration of a species that was formerly extinct in the Zoo’s region, in our backyard, the Genesee River.

The Lost History of Lake Sturgeon

Lake sturgeon were once so abundant in the Great Lakes region that they were caught and discarded by fishermen. Today they are considered a threatened and vulnerable species. Called the “Dinosaurs of the Great Lakes,” the lake sturgeon (Acipenser fulvescens) is the oldest and largest native species of fish in the Great Lakes.

Because of this, sturgeon are often called “swimming fossils”, having inhabited the Great Lakes region for more than 10,000 years.

The lake sturgeon was revered by the Native Americans, with the fish providing food, oil, and leather. As North America’s population grew, sturgeon became a valuable food and fuel source. This led to overfishing and the population declined rapidly. In 1929, commercial and sport fishing of lake sturgeon was closed. The lake sturgeon’s numbers have also dropped because its spawning grounds are being destroyed and polluted.

Lake Sturgeon on the Decline

Lake sturgeon are large-bodied and spawn only intermittently, having an extremely slow reproductive cycle. These characteristics, along with habitat degradation, led to severe declines in New York State’s spawning populations.

The state listed the lake sturgeon as a threatened species in 1983. By the late 1980s lake sturgeon – a fish present in New York’s waters for 85 million years – were extirpated, or regionally extinct in the Genesee River due to pollution, habitat loss and overfishing. The Rochester Embayment was designated an Area of Concern by the EPA in 1987. The embayment area includes the mouth of the Genesee River and six miles south to Lower Falls, an area once critical for sturgeon breeding. During this time concentrated efforts to clean up the Genesee River began. In 2003, after years of pollution restriction, scientific assessments of habitat confirm an improved Genesee River health may be suitable for sturgeon reintroduction and survival.

From 2003 – 2004, the U.S. Geological Survey together with the New York State Department of Environmental Conservation stocked the Genesee River with 1,900 juvenile lake sturgeon to restore the species to its natural habitat. For the next decade, annual netting data including morphometrics (length, girth, weight) and population estimates (mark and recapture data) demonstrated that the sturgeon released in 2003/2004 were thriving. Since 2003, 7,500 hatchery-reared sturgeon (about 1,000 per year) have been released into a healthier Genesee River. All data provide evidence of a flourishing sturgeon population including 15-year-old spawning males found in 2018. At this time there were still no spawning females found but hope remained for 2021.

“This is a great story of how conservation takes time and dedication to see it through to success.”

On May 25, 2021, lead scientist Dr. Dawn Dittman, who has been working with the DEC to collect scientific data on lake sturgeon since the inception of the stocking program nearly 30 years ago, and the field crew from the USGS Tunison Laboratory of Aquatic Science pulled a 61-inch, nearly 70-pound female lake sturgeon from the Genesee River. This 18-year-old female sturgeon was one of the stocked juveniles, and now had mature eggs: eggs that will help produce another generation. 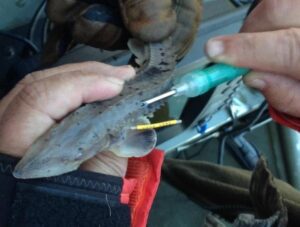 This is a success story that underlines the importance of partnerships. Science and regulatory agencies USGS, US Fish and Wildlife Service, US Environmental Protection Agency and the Monroe County Department of Health depend on non-profit organizations like the Seneca Park Zoo Society that help to educate the public about lake sturgeon and the Genesee River ecosystem.

Past, Present, and Future

More than two decades ago, Dr. Jeff Wyatt, then Seneca Park Zoo Director of Animal Health & Conservation, was introduced to Dr. Dawn Dittman PhD, USGS Aquatic Ecologist. Dr. Dittman was just beginning a new project restoring a native fish, the lake sturgeon, in the lower Genesee River adjacent to Seneca Park Zoo. Our two worlds, the USGS Tunison Aquatic Science Center and Seneca Park Zoo, intersected with this chance encounter growing over nearly two decades into Rochester’s most successful ever “rewilding” and biodiversity enhancement initiative. The Seneca Park Zoo has juvenile sturgeon on exhibit in our E.C.O. Center and has a long history promoting Genesee River ecosystem health, participating in the County’s Remedial Action Plan for delisting Rochester’s EPA AOC and demonstrating our Zoo’s commitment to restoration and conservation of a native species that disappeared from the Genesee almost 100 years ago. The Zoo has spent almost two decades advancing lake sturgeon restoration in the Genesee River. The Zoo’s Urban Ecologists have participated in the sturgeon restoration program since its origin. Our Urban Ecologists helped in engaging the community through public presentations and participation to raise awareness about the program. Through a strong understanding of the role of sturgeon in the Genesee River ecosystem, they are able to teach others about the importance of the reintroduction program, and play an active role in returning this once locally extinct fish to our waters. The Seneca Park Zoo is proud to be the temporary home to juvenile lake sturgeon each year to share these amazing fish with the public. We are incredibly proud to see our work on the Rochester Embayment Area of Concern coming to such tangible fruition with the return of spawning lake sturgeon. The lake sturgeon restoration program relies on science to safely reintroduce hatchery-reared sturgeon into the lower Genesee River adjacent to Seneca Park.

“This is a great story of how conservation takes time and dedication to see it through to success.” says Seneca Park Zoo Director Steve Lacy. Lacy continues, “While lake sturgeon aren’t out of the woods yet, we are starting to see the results of lots of hard work by many people, including the team at Seneca Park Zoo. Most importantly, I think this story should give us all hope, we can make a difference, we can change the world. I am excited to see what is coming for lake sturgeon, and all of the conservation efforts the Zoo supports.”

Visit hatchery-reared, juvenile sturgeon in the E.C.O. Center before being released by USGS and NYSDEC when they reach two years of age. If you accidentally catch a sturgeon when fishing, try to take a photograph without removing the fish completely out of the water. Write down the number on the yellow tag at base of dorsal or pectoral fin and report your information to NYSDEC. It’s ok to cut the fishing line if you cannot see the hook since sturgeon digest fishing hooks as easily as zebra mussel shells. To report a catch, if you see anglers catching or targeting sturgeon, or see a sturgeon washed up on the beach, contact NYSDEC at region8@gw.dec.state.ny.us or call 585-226-5366.