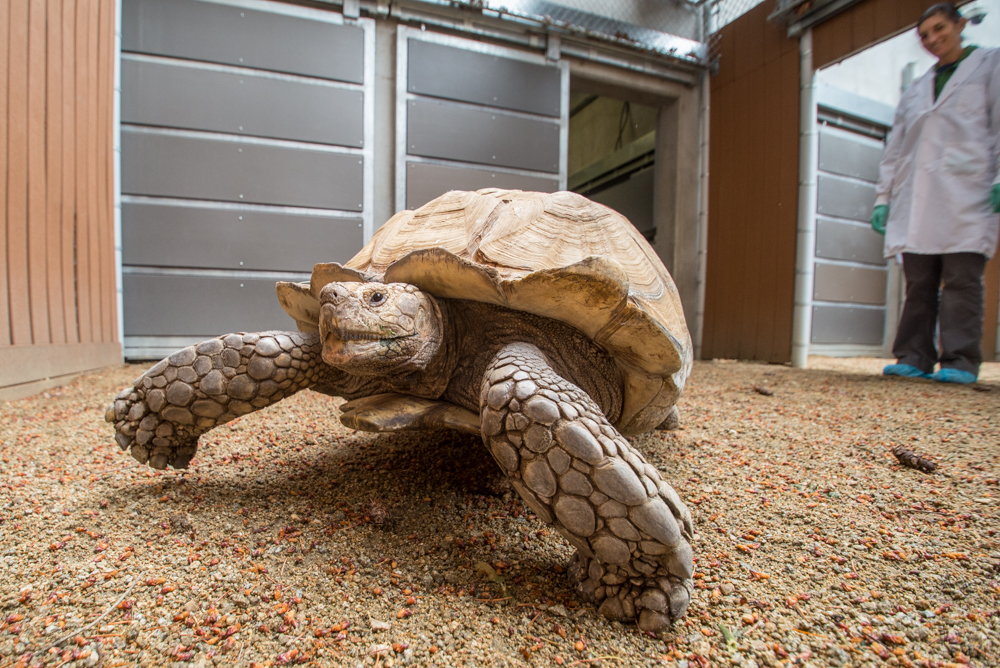 Animal moves are part of the growth and operations of every zoo accredited by the Association of Zoos and Aquariums (AZA). When animals at Seneca Park Zoo are set to be transferred to other locations, or when animals from other zoos need to move to Seneca Park Zoo, animal care staff guide the process to ensure that it goes smoothly. Animals are moved for a variety of reasons, but many do so in order to join a new social group and begin breeding as part of recommendations from the AZA Species Survival Plan (SSP) for their species.

Earlier this year, the Zoo moved two very different animals–two African spurred tortoises and a California sea lion–to other zoos. We talked to two members of our animal care staff to learn more about what these moves entailed and how they are creating opportunities, both here at Seneca Park Zoo and at other institutions, for education and conservation.

Why were Dozer and Shelly moved to the Oregon Zoo?

As Seneca Park Zoo moves forward with expansion plans, it makes sense to strategically plan for the future to make sure we find good homes for some of the animals in the collection. We will need to remove some current exhibits to design and build new ones. The Oregon Zoo was looking for large African spurred tortoises. One of their Curators put out an inquiry among AZA Zoo’s and the time was right for us to move ahead with future plans.

What will make the Oregon Zoo such a great home for them?

Were there any special accommodations needed to be made to ship this species?

First of all, it’s not easy to ship large tortoises to Oregon. Special arrangements were made with FedEx and a staff member from Oregon Zoo flew to Rochester to personally fly with Dozer and Shelly on their journey back to Oregon. The shipping crates were designed and custom built here at the Zoo by our lead Maintenance department craftsman, Jim Paxon. He does an excellent job at building shipping crates for any of our collection – sometimes with unique features. For large tortoises, it is really important that they can turn around, but still not create enough leverage to break the crate – especially while in flight. It’s also important to build a crate that is tall enough that a tortoise can’t just break the lid off by standing up.

How does Dozer and Shelly’s move fit in to preparations for the Master Plan?

Moving them will allow us to move forward with Master Planning and design to renovate the first area when entering the zoo. Their exhibit is intended to be removed as part of the Master Plan development. The new area at the front of the zoo will focus on tropical Asia and Africa. Therefore, taking advantage of an opportunity to place them at such a great institution will help us immensely in moving forward as planned.Zoo Keeper James Weinpress on moving P.J. the California sea lion to Riverbanks Zoo

What specific accommodations were made for P.J. during the move? What factors were necessary for the success of the transfer?

The transfer process was a long-term collaboration between the staff at both Seneca Park Zoo and Riverbanks Zoo. While the curator staff at both facilities worked out the logistics of the trip, the animal care staff met to plan and implement specific training that would ensure P.J. would be well prepared for his journey. Since P.J. would be traveling in a large transport crate, he was given access to it 24/7 which would allow him to investigate and become comfortable around it. For several days before the move, he was actively trained to go into his transport crate, one small step at a time, until he was going completely inside of it when asked by his trainers. Once inside, he was given lots of fish and praise. This made going into the crate one of his favorite places to be since he was always rewarded inside. The other sea lions at Seneca Park also enjoyed having it around, often sleeping in it at night!

How much did P.J. eat during the transfer?

On the day of his trip, P.J.’s morning session was carried out as it would be any other day. He earned fish rewards as he worked through his behavioral routine. One of our biggest goals was to make sure P.J. remained as calm as possible and starting his day like any other was a big part of that. P.J. ate again once he arrived at his new home at Riverbanks Zoo. This was a great sign that he was not stressed and feeling good after his long transport!

How did you moderate temperature during the trip?

Marine mammals such as sea lions and seals can easily overheat if they are out of water for too long. For this reason, keeping P.J. cool was a top priority. The transport truck had several pump handle misters that could be used to lightly mist P.J. with cold water if necessary. There were also several large containers of ice available that slowly melted over his transport crate and provided him with an occasional cool shower. Additionally, a powerful air conditioning system was set on “high” for the entire trip. I wore two sweatshirts with the hood up for the entire 13 hour trip! I was able to check on P.J. every 45 minutes to take the ambient temperature of the truck and to monitor his behavior.

How did P.J. begin acclimating to his new habitat when he first arrived?

P.J. spent the first two days becoming familiarized with his new home taking in new sights, smells, and sounds. He was able to observe the other three sea lions that he would be sharing his exhibit with. He very quickly became interested in interacting with two of the younger males close to his age named Ranger and Maverick. They were first allowed to interact through a door, getting to know one another through sight, smell, and body language. After observing their behavior, Riverbanks keepers then allowed the three boys access to one another and they immediately began to socialize as all sea lions do, chasing and playing with one another in and out of the water.

When is the transfer considered successful?

In my opinion, a transfer is considered a success when the animal arrives at their new home as quickly and calmly as possible. By these standards P.J.’s transport was an overwhelming success! Every step, from P.J. being asked to go into his transport crate to the trip to South Carolina and his acclimation to his new home, went smoothly and as planned. Throughout the entire process, P.J. exhibited behaviors appropriate for his species and to his own personality. These were both signs that throughout his journey down south, he was very comfortable. Last week, the Democrat and Chronicle featured the Zoo in their latest “Hot Jobs” column. General Curator David Hamilton answered questions about his busy days, his favorite animals and how Zoos fulfill conservation goals around the world.

Polar bears seem to get all the attention in climate change debates, but David Hamilton wishes snow leopards, frogs, sturgeon and other animals threatened with extinction shared the limelight.

“People don’t always realize how intricate and involved the lives of animals are,” said Hamilton, general curator of the Seneca Park Zoo, which has about 180 species, “and how the whole world is tied together.”

Monroe County Executive Maggie Brooks today announced that two of Seneca Park Zoo’s African lions, Savannah and Amali, will be leaving Seneca Park Zoo later this year. The two female lionesses are heading to Milwaukee County Zoo in Wisconsin as part of a recommendation from the Association of Zoos and Aquariums (AZA) Species Survival Plan (SSP) for this vulnerable species.

“Our Zoo and its visitors have enjoyed the opportunity to watch Savannah and Amali grow over the past two years. It will be a bittersweet day when we say goodbye and send them off to their new home,” said County Executive Maggie Brooks. “However, their departure opens up opportunity for a new beginning at our zoo, and we are looking forward to the possibility of new cubs in the future.”

Savannah, born at Seneca Park Zoo in 2013 and named through a public contest, may receive a future breeding recommendation with one of the Milwaukee County Zoo’s male lions. She is particularly desirable because her parents, Chester and Asha — who will continue to reside at the Zoo — represent new genes in the North American population of African lions in conservation care.

Amali was born at the Wildlife Conservation Society’s Bronx Zoo in March 2013 and has resided at Seneca Park Zoo since July 2013. Because she has more relatives in the population in conservation care, Amali does not currently have a breeding recommendation. Her companionship to Savannah will play an important role in the move, however, as the lionesses behave as sisters.

“This move gives us the opportunity to once again allow our adult lions to reproduce and fulfill our ongoing participation in the African Lion SSP,” said Larry Sorel, County Zoo Director. “With fewer lions, the staff will be able to focus on providing increased enrichment and preparation for future additions to the Zoo family.”

Pamela Reed Sanchez, Executive Director of the Seneca Park Zoo Society, adds that Savannah and Amali have “connected hundreds of thousands of people to wildlife in wild places, providing transformational experiences for our visitors. The success of A Step Into Africa has set the standard for future additions to Seneca Park Zoo.”

Plan a Zoo visit so you can bid farewell to Savannah and Amali. They will be on exhibit from 10:30 a.m. to 2:30 p.m. daily. The Zoo is open from 10 a.m. to 3 p.m. daily. Once on grounds you may stay until 4 p.m. For admission rates and additional Zoo information, visit senecapark.wpengine.com.